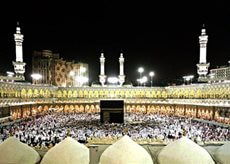 The more physically healthy you are, the easier it would become to perform the rites and rituals associated with Umrah and Hajj. If you have decided to perform Umrah and Hajj, then it would be very significant for you to be as healthy as possible. This will need walking as much as possible, begin about 6 to 8 weeks before departure, walking more and more distances as the period of departure arrives.

The performance of Hajj or Umrah is mandatory on all adult physically and financially capable Muslims who have the means to make the trip to the Holy City of Makkah. Umrah is regarded as a minor or lesser pilgrimage with only part of the required rituals performed. Whoever enters the Meeqat (boundary of the sacred Land) has to perform Umrah, which includes Tawaaf (seven circuits around the Holy Kaabah) and Saaee (seven times between Hills of Safa and Mount Marwa).

Good health makes it easier not just to enjoy Hajj and Umrah in the pleasure of ALLAH Almighty but also to make maximum utilize of the opportunity to make as much worship (ibadah) as possible.Health plays most important role in fulfilling the requirements of Hajj and Umrah as Hajj and Umrah can be physically demanding depending on conditions prevailing at the time.

The following is a guideline and should be accompanied by your own Doctor's advice concerning to your own health requirements.

The more physically healthy and fit you are, the easier it would become to perform the various rites and rituals associated with Umrah and Hajj. If you have decided to perform Umrah and Hajj, then it would be very significant for you to be as healthy as possible. This will need walking as much as possible, starting about 6-8 weeks before departure.

A brisk walk for about an hour 3 times a week would be enough to prepare for an umrah and Hajj. During Hajj and Umrah, the specified footwear for men is there a high arch on the top of the foot necessarily needs to be exposed. The sandals or slippers that are used require being broken-in well before Hajj and Umrah. Using your new sandals well before departure helps to make the feet comfortable to the footwear.

Women may wear any relaxing footwear. Total distance to walk approximately 10 to 12 kilometres to Arafat and 10 to 12 Kilometres back to city Makkah. Male are not allowed to cover their heads during Umrah and Hajj. The earlier exercise is started, the better. For those people who can do, brisk walking, swimming, stationary cycling, etc. would be outstanding forms of exercise.

Tawaaf is approximately 200 metres to 2 kilometres depending on the crowd available and where it is performed, e.g., 1st floor of the Haram Shareef. Saaee (running between Safa - Marwa) - approximately 3.5 kilometres. Physical fitness is thus very significant.